“I was awakened, by the telephone from a deep slumber, where I dreamed of the wonderful party I would have to welcome the New Year. Who could this be I wondered as I came down the stairs, a client, a relative or a wrong number. “Hello this is Pat a hysterical voice broke into my woolly brain, I am sorry to tell you but the club has burnt down” I soon saw for myself that the club had been burnt down from “bow to stern” with most possessions in it.”

At 8 a.m., Lar Collins had arrived to go out training. He was greeted by smoke pouring from all parts of the boathouse. Quickly he raised the alarm, rousing Jim Wallis and his family from the house next door. Mark Kelly arrived on the scene shortly afterwards and together they made every effort to save the boats and oars. Just as they had put their hands on the best eight, amid smoke and flames, a tank burst in the roof void sending them scurrying, the rescue had to be abandoned, new eights, fours, pairs and sculls melted into rubble, cupboard of spares all lost. Six units of the Dublin Fire Brigade poured thousands of gallons of Anna Livia into the flames as they hacked their way through the burning building. Work which had been painstakingly put in place over the last couple of years, to renovate the old clubhouse, was now a smouldering wreck, only ghosts of well known craft remained. 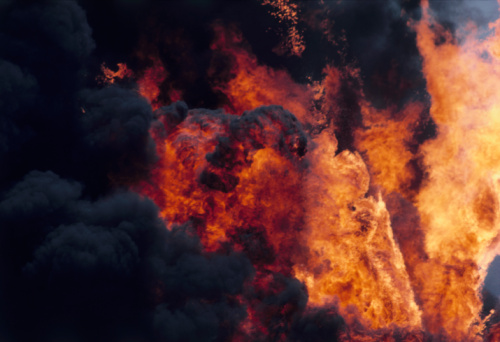 Note: This picture is for illustration purposes only…..!

The remains of the building had to be demolished.  Fortunately, Commercial’s legendary coach, Gerry Cantan, is also a talented architect and he designed the new building.  The new building has proven to be both functional and aesthetically pleasing.

During our homeless period, we received great assistance from UCD Boat Club in allowing us to use their premises.  We also received a loan of equipment from Garda Boat Club.  Their help will always be remembered by our club.

The new boathouse was officially re-opened by a youthful Bertie Ahern, TD on the 8th of September, 1995.  Commercial Rowing Club are grateful for the assistance received by way of funding from the National Lottery.