Bowball to Bowball, Single Sculls everywhere; it must be that time of year again!  The 50th Dublin Sculling Ladder 1,850 meter time-trial will take place on Saturday 10th October in Islandbridge.  Click HERE for official notice from organizers (pdf).

This year, being the 50th anniversary of the DSL, the organising committee intend that the prizes be presented at 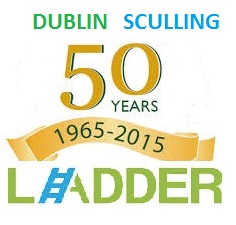 8pm in the opulence of Garda Boat Club (not the usual 6pm as was the case in previous years).   Music and finger food will be on offer for all fans of this event, which hath produced some of our nation’s fastest scullers.

The Dublin Sculling Ladder was founded in 1965 by Michael Johnston (whom we hope to see on the big day).  Constant like the Northern Star, the DSL always runs on the second Saturday of October.

Note 1:  Sixty-Seven (67) Commercial Scullers participated; Congratulations to Niall Beggan who won the Mens’ Junior time trial.  Above all, well done to all who competed for the first time – it’s what the ladder was designed for.

Note 2: Keep an eye on DublinScullingLadder.ie for future changes in the ladder (via Challenges, etc).